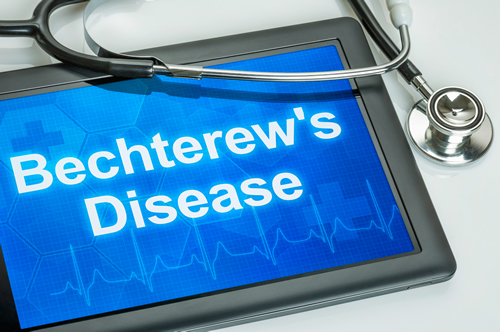 Ankylosing Spondylitis is a type of arthritis that typically begins during adolescence or in a person’s early twenties and occurs more often in men than in women. However, once experiences onset, they are affected for the rest of their lives. It is estimated that between 0.2% and 0.5% of individuals in the United States suffers from ankylosing spondylitis.  It can cause significant pain, discomfort, and immobility. While there is no cure for the condition, the symptoms can be treated, bringing some degree of comfort and mobility.

What is Ankylosing Spondylitis?

Ankylosing Spondylitis, or AS, is a type of arthritis that causes inflammation in the spine. While the vertebrae are primarily involved, it can also affect other joints as well, including the hips, shoulders, heels, ribs, and the small joints of the feet and hands.

In some cases, the heart, lungs, and even eyes can be involved. If left untreated, the condition can progress, causing chronic pain that can be severe as the spinal inflammation increases. More advanced cases can cause the spine to grow new bone formations so that it is immobile, or fixed, sometimes resulting in kyphosis, which is a bowed or forward stooped posture.

While genetics is believed to be a key player in the development of Ankylosing Spondylitis, the exact cause has not yet been determined. The majority of people who have AS also carry a specific gene that has been linked to the condition.

This gene produces HLA-B27, a protein or genetic marker, that more than 95% of Caucasians with ankylosing spondylitis have. However, there are people who don’t have this protein who develop AS and there are many people who do carry this marker yet never develop the condition.

Researchers theorize that there may be other genes that may be involved, as well as environmental factors that trigger the gene activation, such as a bacterial infection, causing people who are susceptible to AS to activate it. Scientists have identified more than 60 genes that are believed to be associated with AS with only about 30% that are linked to HLA-B27 regarding overall risk. Other genes that have been identified as key to AS include IL-23, IL-17, IL-12, and ERAP.

It is also believed that AS can be triggered when the intestinal defenses break down, allowing certain bacteria into the bloodstream. This can, in turn, cause an immune response.

How is Ankylosing Spondylitis Treated?

AS cannot be cured, but the symptoms can be treated to relieve stiffness and pain as well as delay or prevent spinal deformity and other complications. The damage that it does to the joints is irreversible, so it is best if treatment is started before that occurs. There are several ways that AS is treated:

Chiropractors strongly recommend chiropractic treatment for the non-acute inflammatory stage of AS. Once the condition has progressed to acute joint disease, there is a very high risk of injury or damage to the connective tissue. Adjustments and exercise are used to relieve symptoms, but some of the traditional spinal manipulation treatments are not performed.

A chiropractor will also make recommendations to the patient regarding lifestyle changes that can help with symptoms, such as stopping smoking. Tobacco use can increase inflammation and damage connective tissue. They may also advise increasing their intake of omega 3 fatty acids in their diet. Regular chiropractic care can help patients manage symptoms and prevent disease progression, improving their quality of life.